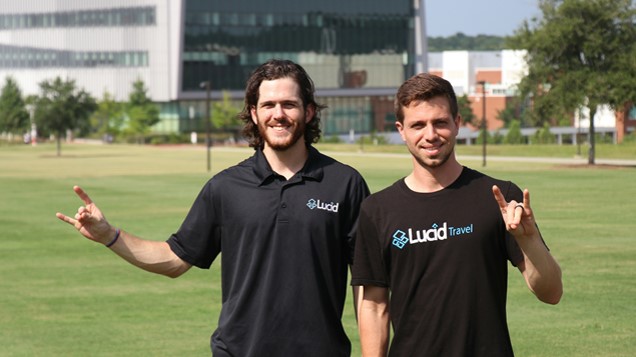 Article by Samuel Griffin (NCSU Technician)
--
In 2015, Ben Knosby graduated from NC State with a degree in chemical and biomolecular engineering. Two years later, he became the co-founder of Lucid Travel, a sports team travel website that he runs alongside fellow NC State alumnus and co-founder, Troy Miller. For Knosby and Miller, it was a career path that made perfect sense — and the data proves it.
Lucid Travel is a service that connects college sports teams to online booking travel sites, while also earning back money for participating teams.
“We connect the teams to those sites and they get up to 5 percent back for booking with us,” Knosby said. “Our sites right now are Priceline, Booking.com, Hotel Planner and Hotels.com. It’s the same price, same inventory, but they get money back by going with us.”
Essentially, Knosby and Miller act as booking middlemen for their users. Travel booking sites pay the company to connect sports teams to their services. Additionally, a large portion of the company’s profit goes back to the teams, earning them up to 5 percent back on their purchase.
“We get the same rates,” Miller said. “We’re connected to the same inventory and we are paid commission underneath the rate that’s paid, and we give a large portion of that to the team with a little bit left over for us which is how we make money.”
The team also saves their users money by doing things like organizing room blocks — a grouping of over 10 room bookings at hotels, which usually come with notable discounts. The business began with a ski trip during Knosby’s senior year of college.
“About 10 of us went on a trip to Colorado,” Knosby said. “We were trying to get it booked and it was about to fail. We were about to give up because we couldn’t get it all worked out, but we found a package company. What that means is, the flight, the lodging and the ski tickets were all one click. So we did that, found it really easy and liked the process.”
The next year, Knosby contacted the same travel package company to try and work out a deal for a group of people in his apartment complex.
“They were like ‘hey, we want to go to Quintana [Mexico],’” Knosby said. “The same company also did generic spring break stuff so I called them and said, ‘hey do you think we could work out a deal, where I can make you some money on this deal by giving you the clients?’ I did that and it ends up I was able to make a good deal of money of this big group.’”
Knosby created a website, called Miller, and the two founded Lucid Travel. At first, the company serviced many different travel groups, but the team decided to narrow down their focus to college sports teams.
“We started talking to a bunch of colleges, cold calling them,” Miller said. “We ended up talking to 103 college club sports departments. We did a research survey, trying to learn about this market we had. We took a scientific approach, learned what was out there, and now, essentially that has been the basis of us trying to launch this beta going into the fall, working with select college sports departments to work with all of their club teams.”
The research found that 80 percent of club sports book online, the average funding for most club sports programs reached only $100,000, and that money was usually split up amongst around 30 teams.
“When you break that down it’s not that much money for teams,” Knosby said. “A lot of the travel is self-funded, so again that speaks to the price point. They are very price conscious, but want to have the autonomy to make their own decisions. That’s how we formulated that this is a worthwhile product for that market.”
Knosby and Miller both quoted Lewis Sheats, executive director of the NC State Entrepreneurship Clinic, who is known to say, “don’t boil the ocean,” referring to narrowing down the focus of a product or service. Knosby, who minored in business administration entrepreneurship, said that Sheats was a big influence on him.
“At the end of the chemical engineering program, I was starting to realize that a lot of what I was learning is not applicable,” Knosby said. “It’s very highly technical and maybe can’t be applied much to the world. What I found in his [Sheats] classes is that it’s all applicable and you can apply it today. He’s more about doing it, rather than theory, and that’s what stuck.”
Miller said he found a passion for entrepreneurship that chemical engineering could not match with after competing in the Lulu eGames, NC State’s startup competition. The pair plans to stay focused on college sports teams for now, but hope to cater toward other types of college-related trips in the future.
--
Samuel Griffin
Features Editor
NCSU Technician
The original article on Lucid Travel can be found on the NCSU Technician website