The Richest Athlete In Sports History 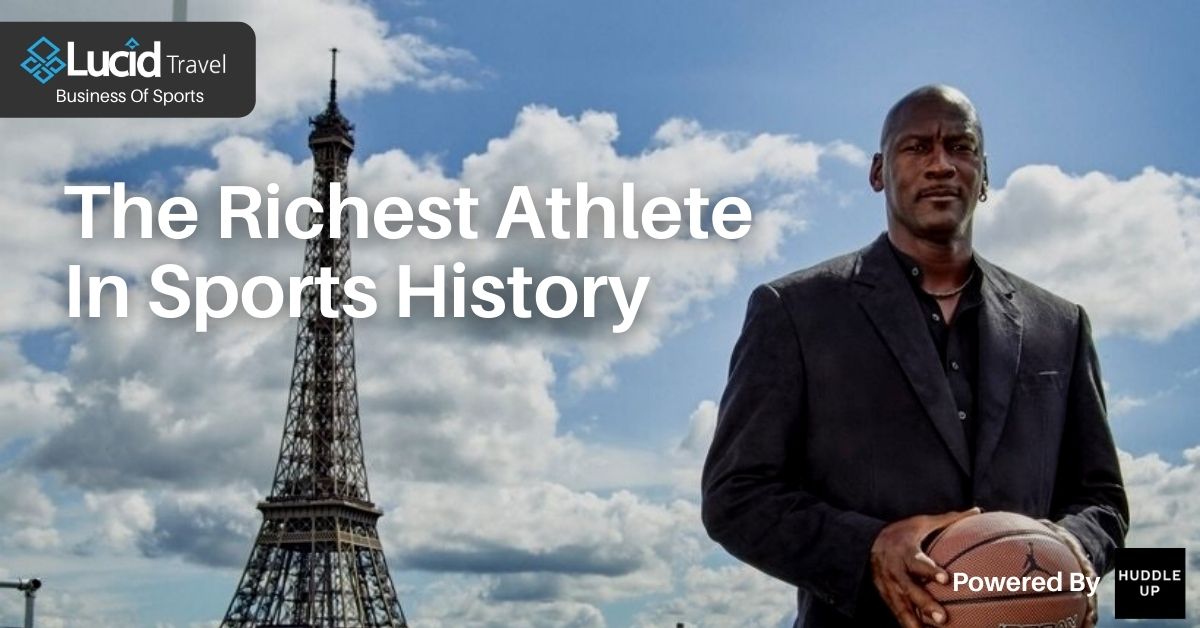 The Richest Athlete In Sports History

His greatness is known and appreciated, but how has he fared in his off-the-court financial endeavors since retirement?

With an estimated net worth of $2.1 billion, Michael Jordan has become the richest athlete in the history of sports. Let’s take at how Jordan turned $90M in NBA earnings into a $2.1 billion empire, cementing his status as a legend on and off the court.

Want to hear an interesting fact?

Over 130 NBA players, and counting, have earned more than the $93.7M Michael Jordan made during his NBA career.

Jordan spent the majority of his NBA career underpaid, earning between $2M-$4M per year. The Bulls, aware Jordan was consistently underpaid, took advantage of a salary cap loophole from 1996-1998. During that time, the rules allowed teams to exceed the salary cap in order to sign or re-sign their own players.

Jordan became a free agent in 1996 and the Bulls proceeded to re-sign him to a 1-year $30M contract, the highest in the league. The best part? They intentionally made it a one-year deal so they could do it again the following year. Jordan re-signed again in 1997 for a league leading $33.1M, a salary record that lasted over a decade (Source).

Here is a year by year look at Michael Jordan’s career earnings: 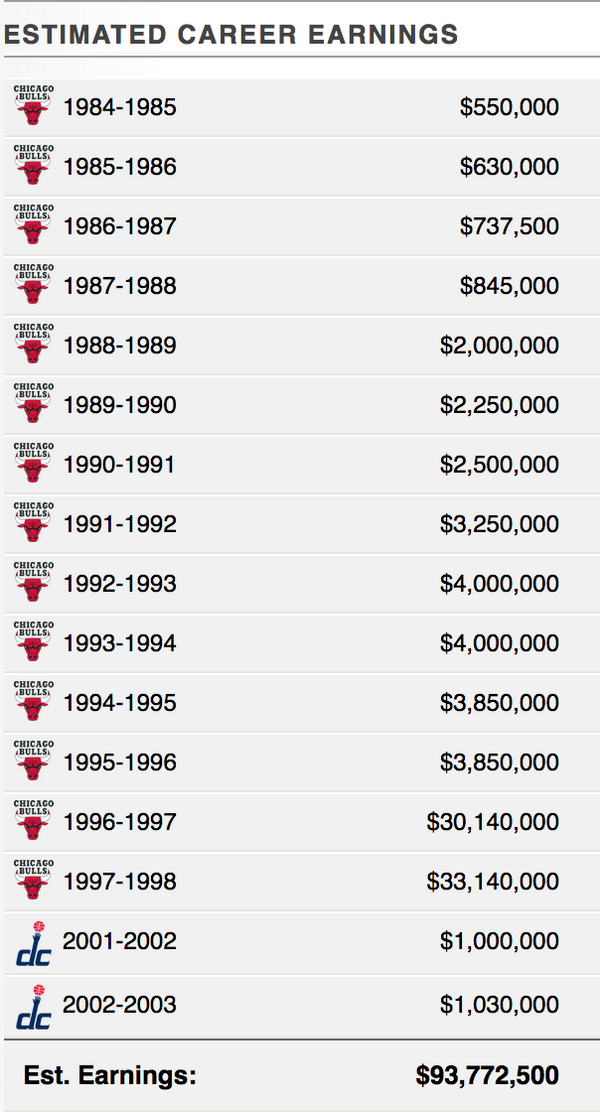 Thanks to the ESPN special “The Last Dance”, we all know the story by now. Michael Jordan wanted to sign with Converse or Adidas, but his mother convinced him to sign with Nike instead. They’ve been together ever since.

When you dig into the details, the Nike & Air Jordan collaboration has been one of the most mutually beneficial sports business deals in history. At the time of signing, Nike was a much younger and scrappier company - doing around $900M in yearly revenue. That number has over 44x in the time since, with Nike reporting almost $40 billion in revenue last year (Source).

Jordan also did pretty well for himself. Since singing the deal as a rookie in 1984, Jordan has made over $1.3 billion from Nike in distributions from his “Air Jordan” collection. It’s rumored Jordan receives a ~5% royalty on all Jordan products sold, amounting to over $130M in yearly income. Over time, the brand has exploded to over $3 billion in yearly revenue for Nike (Source).

Check this out below - Lebron may call himself the “King”, but two decades past retirement, Jordan still has that title when it comes to basketball shoes. 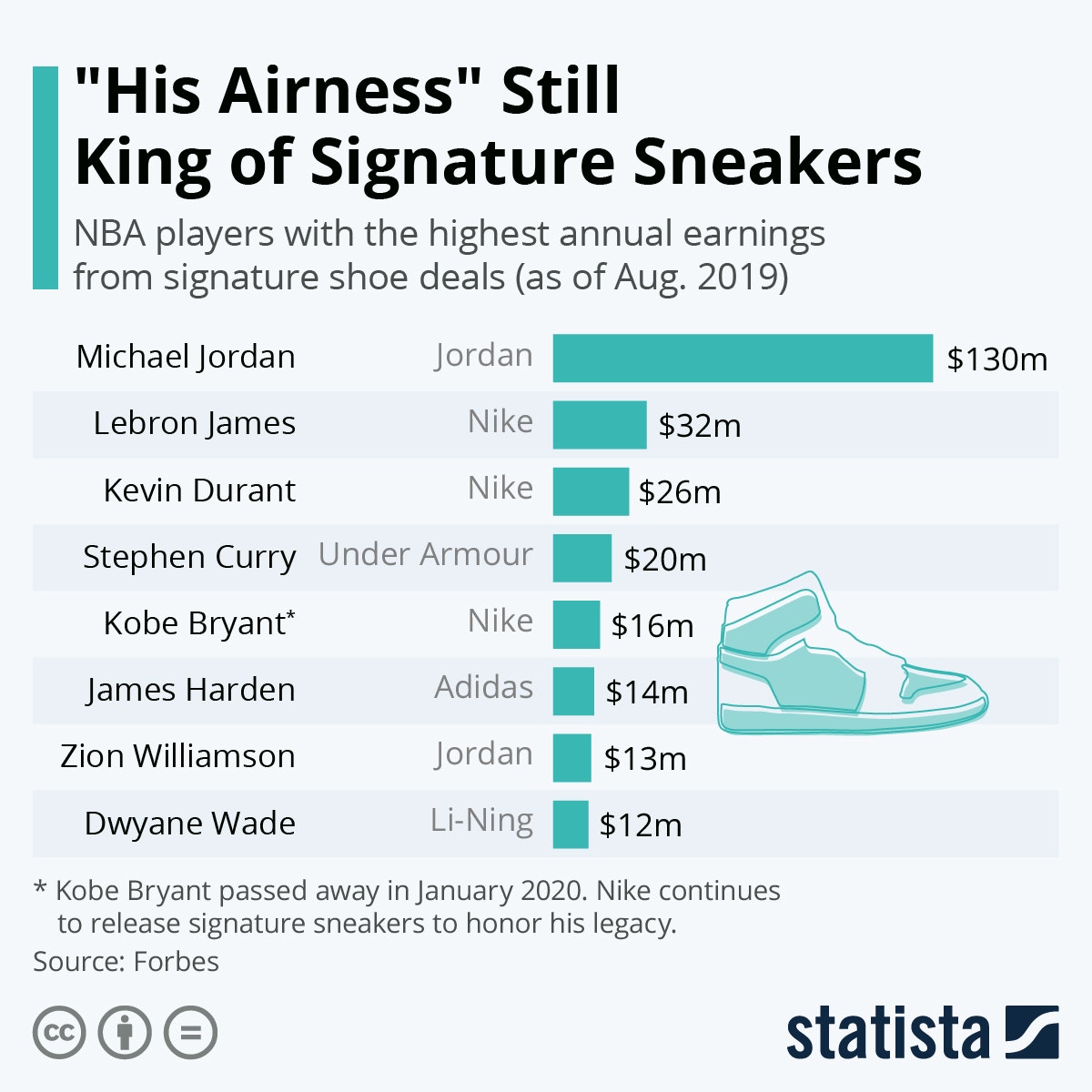 Michael Jordan has certainly done well financially through a combination of basketball earnings, endorsements, and alternative investments - but perhaps his greatest investment of all is the Charlotte Hornets.

In 2010, already owning a small minority stake, Michael Jordan paid Bob Johnson $180M to assume 97% ownership in the Charlotte Hornets. Since his investment, the Hornets have consistently been one of the worst teams in the NBA - with only 2 winning seasons in 10 years. But in a world where media rights have exploded, and international interest is at an all-time high, it hasn’t mattered (Source).

Last September, Jordan sold a 20% stake of the Hornets to two New York Based Investors - which valued the team at $1.5 billion, or almost 6x what he paid for it in 2010. Jordan still has majority control of the franchise and makes day-to-day decisions regarding financials, operations, and franchise personnel (Source).

Below is a good visual of how the Charlotte Hornets franchise valuation has changed over the years.

Keep in mind, Forbes still ranks the Hornets as the 25th most valuable franchise in the NBA. Point being, almost all NBA owners have been pretty happy over the last decade. 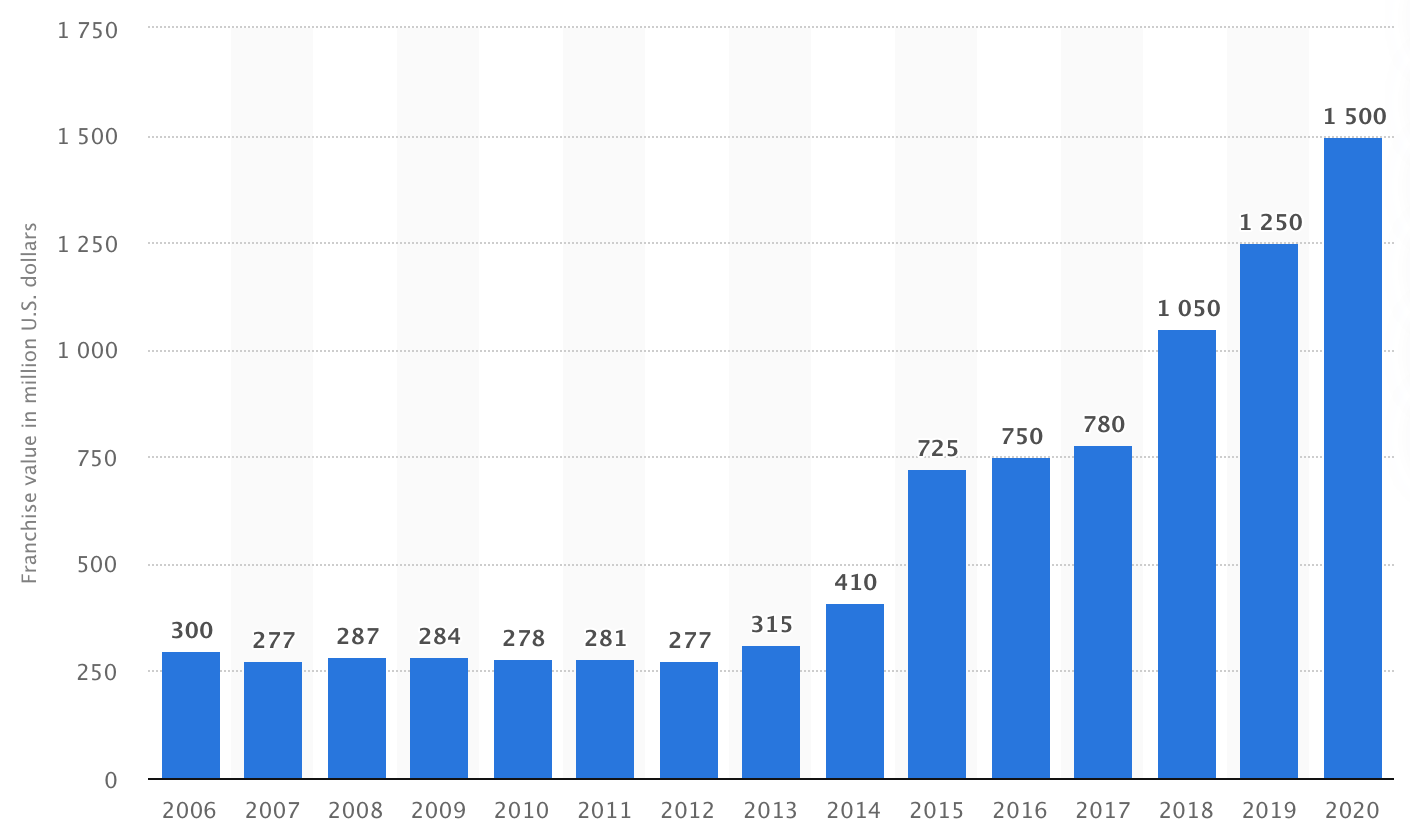 Michael Jordan’s biggest investment is the Charlotte Hornets, but it would’ve been too easy to stop there. Over the last 5-10 years, Jordan has worked hard to diversify his investment portfolio. He now has equity exposure to companies within tech, eSports, alcohol, auto, major league baseball, and more.

Here is a list of investments Jordan has made (Source):

What’s the best bet? It’s hard to tell at this point.

The Miami Marlins are probably a good long-term bet, but Jordan owns less than 1% of the team. On the other hand, Michael Jordan and Mark Cuban were significant contributors in a $44M funding round for sports data company Sportradar in 2015. The equity stake came with advisory board seats and the company is currently valued at $2.4 billion (Source).

With Jordan experiencing success on the court, the sponsors came calling. Over his 13 year career, Jordan had large endorsement contracts with a variety of companies like Nike, McDonald’s, Coca-Cola, Hanes, Gatorade, and more.

In total, Jordan has made over $1.7 billion off endorsements. Even when you exclude his partnership with Nike, it’s still an impressive $400M payout (Source).

What’s Next For Jordan?

Ultimately, your guess is as good as mine.

The most impressive part of MJ’s success is the financial flexibility he’s built up for himself over time. Even when you exclude assets like his equity positions in the Charlotte Hornets and Sportradar, Jordan takes home almost $150M each year in cash.

The chart below tracks how Michael Jordan’s yearly earnings have fluctuated over time. The decline in yearly income you see from the late 1990s to the early 2000’s is attributed to his second retirement. More importantly, look at the steady climb in yearly income from 2005 onward. 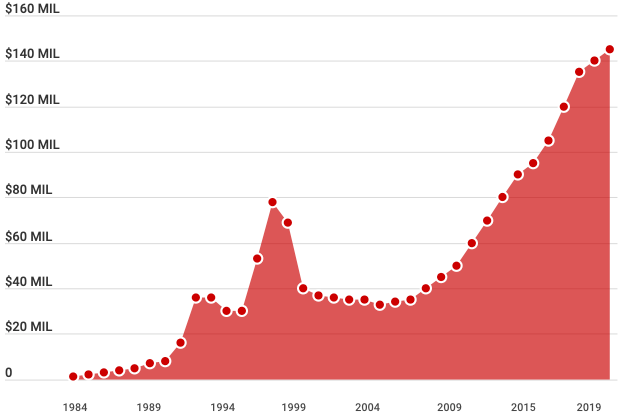 Michael Jordan is one of the greatest athlete investors of all time. Putting in the work required to become the greatest basketball player ever certainly helped, but Jordan has consistently proven he is just as good at business as he was at basketball.